To be that first American balloon aeronaut,
Charles Durant, flying NYC to NJ, 1830,
leaving Earth for a rare aloft view.
Seeing your world as few have seen it.
Feeling both universe small and infinitely godlike. 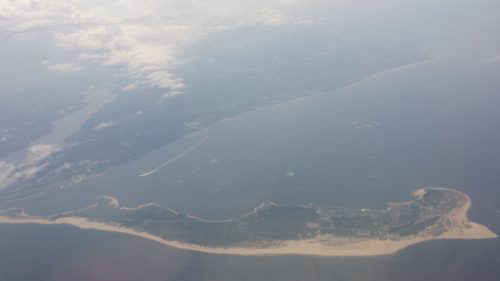 Aerial view of Sandy Hook, NJ – something Durant would have seen on his way across the bay.

Durant took off from the southern tip of Manhattan in 1830. Ballooning was new and exciting to Americans. Only a few Frenchmen had gone aloft. He dressed in a top hat and tails and dropped copies of poems praising the joys of flight. The flight of 25 miles took about three hours, and he landed in a Perth Amboy, New Jersey farm field.

He wrote about being aloft quite poetically:   “Here burst upon my sight one of the most imposing views I have ever beheld. Call it majestic, splendid, or sublime, — invoke a Shakespeare’s mind to describe, or a painter’s to portray it, — they, and even thought must fail to conceive the rich downy softness and white fleecy accumulation of clouds piled in waves as far as the eye could reach, covering the earth, and closing to my sight the land, water, and everything, animate or inanimate, that I had so long and often viewed with delight. Above me nothing but a clear, cerulean expanse, — the golden sun-beams spreading over the vast ocean of clouds, and extending through immensity of space where sight is bounded, and from whence even thought returns, unable to traverse the confines of the vast field beyond. Here was a scene sufficient for the writer to fill volumes, and the painter to exhaust his skill, in trying to delineate the infinitely delicate and mellow tints reaching to boundless extent.”

#flowers - each is a kind of mystery
“I have measured out my life with coffee spoons. “ - T.S. Eliot
This weekend’s stars are the tiger lilies. #tigerlily
Prolific self-seeding rose campion ends up growing in crevices, the lawn and beyond - but I’ve been looking at them since childhood so I “tend” this wild girl. AKA catchfly, Lynchnis coronaria