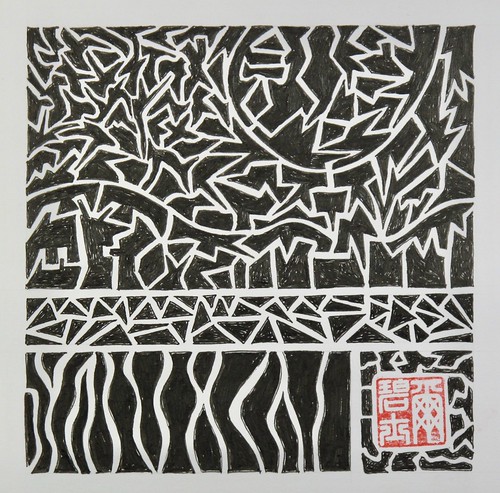 It is always great to find out that someone is reading your work online, but recently I discovered a reader and fellow writer who tried the ronka form. I “met” Bruce Schauble online a bunch of years ago. We were both teaching, blogging and writing creatively. It turned out we were also both doing art, but he was doing it on a much higher level.

Bruce recently retired as the Director of Instruction at Punahou School in Honolulu, Hawaii. I am a bit envious of that location – especially this weekend as we expect snow to blast us in the northeastern U.S. I’m sure Bruce can identify, since he taught for a few decades in Massachusetts before escaping to paradise.

Here’s some of what he recently posted on his blog at throughlines.blogspot.com about what he calls “sonneteering.”

“For the last maybe six months I’ve been concentrating on writing, poetry mostly. There are always essentially three questions to be worked out in the writing of a poem: where to start, how far to go, and where to end. Ken Ronkowitz, a teacher and writer I admire who lives in New Jersey, maintains a whole bunch of web sites that have to do with writing and education and life. I’ve had fun with a form he invented, based loosely on the Japanese form of the tanka, which he calls the ronka. The formal rules are simple: five lines, seven words per line. It’s an interesting form to play with, because once you write your first line you only have three lines before whoops, it’s over.”

Here are two ronkas that he posted:

There’s a logic to all this, first
the leap into space, then the
attempt to see something quickly enough
that the last line (coming up fast)
doesn’t cut you off before you’re done.

Another April opens up, hummingbirds and bees
flitting in the branches of the cherry
trees, a restless breeze stirring the air.
The worst of the winter is behind
us, the sidewalks flanked with new flowers.

Then he turned to the sonnet form and found that “luxuriously roomy.” I can identify with that. With the 7 by 5 ronka form you will either love the compression, or feel a bit trapped.

As Bruce says, the sonnet is actually more flexible than the ronka. You can do the octave and sestet, or three quatrains and a couplet, or seven and seven. And you can do the rhyming or not.

NOTE: I have also experimented with the double ronka (two 5 line stanzas) and there is nothing stopping you from stringing together a series of ronkas renga-style.

As I commented on Bruce’s post, I was working on a sonnet last year, and discovered the quatorzain. The quatorzain (from Italian quattordici or French quatorze, fourteen) is a poem of fourteen lines. Though people sometimes use the term interchangeably with the sonnet, it is usually used to distinguish fourteen line poems that do not follow the various rules that describe the sonnet.

Here is one of Bruce’s sonnets:

Painting is still the material form of desire. – William Logan

Supposing this to be true, what kind of desire
might we be talking about? Sublimation? The yellows
and reds and blues inviting, as flowers do, bees,
the oblique mechanics of pollination and sex?
Is it a desire for self-transcendence, the urge to make
something to stand in for us when we are gone, to speak
for us once we can no longer speak for ourselves?
Or to evoke the viewer’s desire to possess this work,
the pride of owning objects we have coveted, and won?
Or perhaps simply the desire to have, for as long as
we hold the brush in our hand, a focus, a reason to hope
that at the end of the day’s work there will be something
real, something created, something visible to justify
the hours of our life given over to the making of it?

I recommend that you take a look at Bruce’s reflections on teaching, reading, and writing and art

After the ordered meter and the rhyme,

feeling Italian or English in our form,

after we make the turn and seemingly end

heroically, after the fourteenth line, we wear

the crown and all hell breaks loose.

The shape from intended function or purpose.

The poem beating with its 5-7 heartbeat.

Our life evolving into an unimagined design.

is a vase you pour words into.

But the water that comes out from

that vase’s crack also has a form.

A free form, that I cannot describe

When I thought about doing this daily practice of writing, I knew I wanted to do shorter poems and that I wanted some discipline, as in a form to follow.

I thought about the many Japanese forms that I enjoy reading and writing. The haiku is the form most people are familiar with, and it is a form that gets far too little respect in the Western world,

People know that form as three lines of 5-7-5 syllables. But that’s an English version, since Japanese doesn’t have syllables.

The term waka originally encompassed a number of differing forms including the tanka (“short poem”) and chōka (“long poem”), sedōka (“memorized poem”?) and katauta (“poem fragment”). Of those, only the tanka has really survived.

The tanka form consists of five units (often treated as separate lines when romanized or translated) usually with the following pattern of 5-7-5-7-7. Even in that short form, the tanka has two parts. The 5-7-5 is called the kami-no-ku (“upper phrase”) and the 7-7 is called the shimo-no-ku (“lower phrase”).

For my invented form, ronka, there are 5 lines, each having 7 words without concern for syllables.

Traditionally tanka has had no rhyme, and rhymes, even accidental ones, were considered faults in a poem.

My own ronka will focus on observations of the day as seen in the outside world and the inside worlds of dwellings and the mind.

A principle of haiku is to use seasonal words to show rather than tell.  Even in English haiku, cherry blossoms, rather than “spring” or April would be preferred.

Haiku also don’t include the poet or people as frequently as we do in Western poetry.

WRITING THE DAY is a new daily practice I am going to attempt for 2014. The idea is simple – and not totally original – to write a poem each day.

I wanted to impose some form on myself each day. I love haiku, tanka and other short forms, but I decided to create my own form for this project.

I am calling the form ronka – obviously a somewhat egotistical play on the tanka form.

These poems are meant to be one observation on the day. It might come to me upon waking. It might come during an afternoon walk, or when I am alone in the night preparing to sleep.

I am thinking that these observations will come from paying attention to the outside world from earth to sky. Other poems will come from inside – inside a building or inside me.

William Stafford is the poet who inspired this daily practice the most for me. Stafford wrote every day of his life from 1950 to 1993. He left us 20,000 pages of daily writings that include early morning meditations, dream records, aphorisms, and other “visits to the unconscious.” He used sheets of yellow or white paper and sometimes spiral-bound reporters’ steno pads.

It’s not that I don’t already write every day. I teach and writing is part of the job. I do social media as a job and for myself.  I work on my poetry. I have other blogs. But none of them is a daily practice or devoted to poems.

When Stafford was asked how he was able to produce a poem every morning, starting at either 4 or 4:30 AM depending on which account you read, and what he did when it didn’t meet his standards, he replied, “I lower my standards.”

I like that answer, but I know that phrase “lowering standards” has a real negative connotation. I think Stafford meant that he allows himself some bad poems and some non-poems, knowing that with daily writing there will be eventually be some good work.

Makes sense to me.

Sage advice
Digging up a new flower spot in the backyard and unearthed this #fossil. Found my first one was I was 10. It’s still a thrill.
I like how this Akila “lavender shades” (osteospermum) looks purple-blue underneath and pink on top.
Great to see a neighborhood turnout for the ribbon cutting on the @yorkshiredrivebylfl Little Free Library today. Dropped off some books and got a Curious George to read to my little Remi. Love Kate’s Disneyfied decorating ( but there are books for kids and grown up kids too).