Persephone has returned again to the underworld.
The Sun paused for just a moment
and where darkness had reigned, the light
has begun to overcome it – but there
is still darkness, cold, and sadness ahead.

more on Persephone and the seasons

Sometimes when I am writing a poem in the ronka form, it just won’t fit into the little 7X5 box I created.
Here is one of those poems.

Summer is only a season.
We teach,
and then we are gone.
What more can we do
but plant a few seeds
and hope for rain?

These mild, like summer, autumn days float
with gossamer clouds and filmy spider webs
moving slightly in the breeze and geese
wedging to the lake overhead as I
take off my goose-down vest and rest. 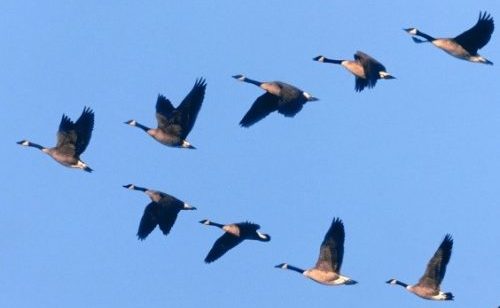 “Goose Summer” is a Middle English term for this kind of late summer weather. See my etymological explanation at whynameitthat.blogspot.com/…indian-summer-gossamer-and-goose-summer

“Life is a series of natural and spontaneous changes. Don’t resist them; that only creates sorrow. Let reality be reality. Let things flow naturally forward in whatever way they like.” –  Lao Tzu

The birds are leaving for winter places
on this, my birthday. I’m staying here.
The seasons are changing. So will I.
I don’t know my destination or if
I will return here. So it is.

October 4, 1582: Pope Gregory XIII declared
the next day wouldn’t be the fifth.
It would be Friday, October 15, 1582.
Ten days from the Julian calendar gone.
And let’s call the new version Gregorian.

In the Pope’s defense, he was trying to fix the existing calendar which was 10 days out of sync with the seasons – but still, a Pope just zapping 10 days out of a year seems like a bit of a power grab. No birthday parties for those born October 5-14 that year.